He grew up on a Lancaster, PA, dairy farm and now lives in Oley, PA.He has been married to his one and only Joyce Hoover since 2004. They have five children and are learning how teenagers think. His parents are lifelong dairy farmers who taught him the importance offaith and work ethic.

He is deeply interested in learning how to pass faith, work ethic,and an unentitled outlook to his children.

He has 35 years of experience in the dairy industry and 14 years of electronic and ventilation expertise since starting AmeriWind. They have built over 20,000 ventilation systems since 2008.

An active interest in public speaking has led to speaking at church functions and LanChester real estate meetups. 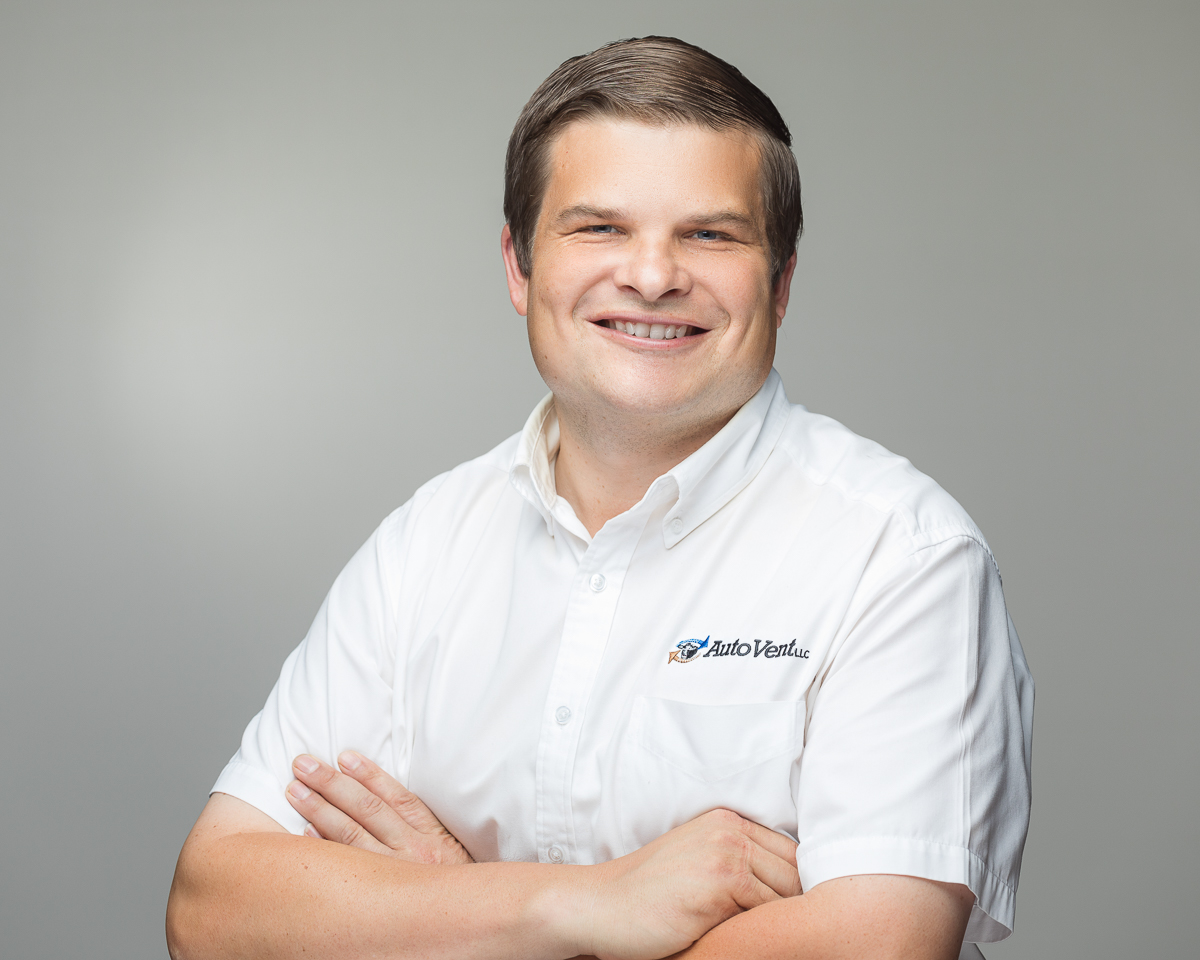 He authored a chapter in Persistence, Pivots, and Game Changers. It's about how he thinks, and it became an Amazon Bestseller. Read it below. Raised as a dairy farmer, Kevin Hoover pivoted to become an electronics entrepreneur with no formal education. 20,000 control systems later, he realized that many of the lessons he has learned can help others. He enjoys sharing the lessons while running AmeriWind LLC, his HVLS fan and control company.

My parents’ dream was to own their own farm. This was in the early 1980s. They had only 30 dairy cows, and interest rates were at 15%. Their siblings told them they would go broke.

Through hard work and with the help of advice from industry leaders,they managed to survive and, within a year, had their herd's production in the top 5% in the county.However, the agricultural economy was tough, and it was a struggle for economic survival.

They were renting their farm, and their dream was to buy so they could call it their own and improve the dairy herd barns to be more comfortable for the cows. It was a struggle. The memory of being repeatedly told, “We are saving for a farm. We can’t spend money on little boy wishes,” shaped my thinking.There was no extra cash, but there was a lot of family time. I was very fortunate to have a loving childhood.

In my early teenage years, I always enjoyed reading about electrical things.Reading our entire encyclopedia and the How It Works set was a lot of fun.When I was 14, my older brother drowned in a farm pond. It was a terrible tragedy for everyone in the family.

Around this time, I took an interest in ham radio. My parents were not too sure who I was getting involved with, but it seemed to be just a bunch of geeky retirement age men who had odd-looking antennas all over their vehicles.Influenced by my brother’s passing, they helped me get the study books. You had to learn a lot about RF propagation, antenna design, and electronics. I really enjoyed it and passed the amateur radio license exam. I ended up not communicating a lot over ham radio, but I really enjoyed learning the electrical aspects of it.

A year later, a neighbor had a huge pile of electronic learning kits,books, and test equipment out in his garbage. I happened to stumble across all this and hauled most of it into my bedroom. There was a goldmine of manuals and learning materials that I would not have had otherwise. This helped solidify my increasing appetite for electronics.

Around this time, I had a lot of foot pain and was diagnosed with severe flatfeet. The foot doctor recommended desk work, NOT farming, for my future.

In 2000, we built a calf barn. I didn’t even bother asking if I could buy a ventilation controller as I assumed the budget wouldn’t get approved. There was an unwritten rule that since there were plenty of boys around who could manually go open and close the curtain, they should do so.

Since I had the interest but not the purchasing authority, I read all the catalogs and owner's manuals I could find on the internet. As I went through them, I realized the ventilation processes we had were not ideal for dairy cows.

I got the idea that maybe I could make something to provide a better solution. The only thing that came to my mind was PLC, or programmable logic controllers, that are used in industrial machinery. I signed up for a local vocational technology class on PLC programming. I was excited, finally beginning my journey. At the last minute, the course got canceled due to low enrollment. I decided to wait until the course was offered the next year, but the same thing happened. I felt let down.

I didn’t know anything about programming logic controllers, but I did find a direct sales company on the internet and purchased a small unit. I taught myself everything about it. All the while, I didn’t tell my family about my project as I was afraid they would laugh at me if I couldn’t figure it out.

Since I was afraid of being laughed at, I had to buy parts on my own dime. I had time but not money. I agonized over each little component decision. It made me think outside the box. I tried a lot of things that didn’t work and read a lot of user manuals for any related machinery to get ideas about what would be the most effective method of getting temperature and weather data into a controller.Within several months, I got it working and installed it in our barn. Even my dad was impressed. It was the first automatic opening and closing curtain on the farm.

It was actually pretty decent as long as you didn’t mind not having any interface to it. I did not create any way to adjust temperatures. It took a laptop and the programming expert to make any modifications. This is a huge no-no. Today,I certainly wouldn’t be installing this system! But then, it was a necessary step in my learning process.

I needed to create an interface, but all the conventional PLC with screens and temperature inputs were too expensive. I eventually found an obscure embedded control board on the internet that was four times as hard to program as anything I had previously studied but was supposed to be able to do all the things I was looking for. I tried it and gave up. However, the parts stayed on my desk and started to really bug me.

After three months, I slowed down and tried to accomplish small bits of programming and was able to successfully get the LED lights to blink. The thrill of seeing my own logic blinking the lights gave me the drive to learn ever-increasing programming tasks, and I eventually taught myself the world of embedded programming.

I did all of this while I worked for the family dairy farm. The wages were low,but Dad wasn’t going to pay more. However, he would allow me to work fewer hours and try to make controllers for other people. Fortunately, things went well enough, and I made ventilation controls for other dairy farmers on the side for three years.

When I switched to full-time, things started picking up. One customer was my favorite. They were half of our sales, plus their management was great. They ordered ahead of time and were nice to work with. Things kept getting busier,and I was feeling good about myself. But there were some quality issues and performance complaints at times. Since I had designed the ventilation control items, I didn’t think the complaints were serious. I was too enamored with the product because I had developed it myself. Sales continued to climb. I felt I was really getting somewhere and knew what I was doing.

One day, I was on a service call with my favorite customer and realized my products were no longer their go-to option for ventilation control. We had a meeting, and it became clear that my lack of response to quality issues handled them to develop a replacement in-house. This replacement had been two years in the making, and I’d had my head in the sand the whole time.

I was able to solve the underlying problems. However, they were no longer interested since they developed their own system.

I put my tail between my legs and thought it wasn’t fair. It affected me in every aspect, to the point it caused my wife to wonder what was wrong. It took several months, but I got over it and realized the problem was with me. Fortunately, I never questioned my decision to continue learning and improving the business.As a result,things improved, and we reached 20,000 control systems after starting from nothing 12 years earlier.

The lesson is, don’t attach yourself too closely to your business results. When business is going great, you likely aren’t that extra brilliant. When it slows down,you still have a lot to be grateful for and are most likely learning something that will help you excel in the future.

By basing your self-worth on what really counts, faith, family, and helping others, you can keep an even frame of mind, even as your emotions cycle.The other lesson I learned very slowly is, disappointments, or what I perceived to be hardships,ended up improving my well-being.

If the PLC courses that I initially wanted to take would have run, I would have learned an entirely different programming skill set than what it took to make inexpensive embedded controls and my future business.

If my feet would have been normal, I would not have had that extra push to develop skills outside of farm life.

If I would have been raised with plenty of money, much less would remain for us to enjoy in the good years since then.

If my parents would not have felt the personal challenge not to give up, I would not have experienced the shaping of my personal philosophy of financial responsibility even during good times.

In my business today, our core purpose is helping customers eliminates tale. By taking what I learned in controlling the air temperature and air quality without dairy animals, we now build ventilation and motor controls for dairy barn sand green houses nation wide.

In my business today, our core purpose is helping customers eliminates tale. By taking what I learned in controlling the air temperature and air quality without dairy animals, we now build ventilation and motor controls for dairy barn sand green houses nation wide.

What our "Big Fans" are saying